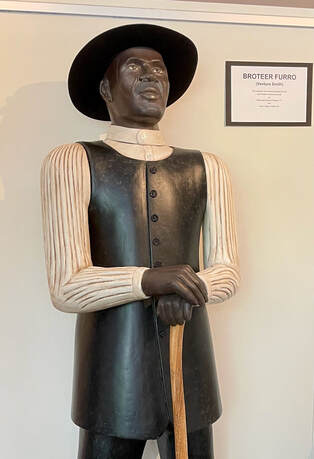 Broteer Furro (Venture Smith) This sculpture was created especially for the East Haddam Historical Society by Weymouth Eustis of Chester, CT and Frank Todaro of Butte, MT
​The Times and Life of Venture Smith

Venture Smith was the son of a West African king, who had several wives. He lived in the Lake Chad area until, at the age of 10 or 11, he was captured by a raiding army and force-marched about 1000 miles to the Gold Coast (Ghana). There he was sold as a slave for 4 gallons of rum and a piece of calico to Robinson Mumford. Mumford changed the name of the young prince from Broteer Furro to Venture as the boy seemed to be a good business venture. Mumford was steward of the slave ship, Charming Susanna, which in 1739 sailed to Barbados, and then on to Rhode Island. Venture lived with the Mumfords enduring increasingly harder and crueler tasks and punishments.

He married another slave, Meg, in 1754, and shortly thereafter attempted an escape. That same year, their little girl, Hannah, was born and, less than month later, he was sold again to Thomas Stanton of Stonington, CT. Stanton bought Meg and Hannah the next year and re-united them all.

Stanton allowed Venture to have little odd jobs. Venture saved his pay in hopes of buying their freedom. Meg and Venture had two more children - two sons, Solomon (born in 1756) and Cuff (born in 1761).

Venture was sold two more times. In 1760, Venture ended up with Capt. Oliver Smith, who was kindly. He let Venture purchase his freedom for a sum of 71 pounds and 2 shillings. At this time, Venture took on the Captain's surname and became known as Venture Smith.

He then moved to Long Island, lived frugally for four years, and purchased his two sons' freedom. Unfortunately, Solomon, the older son, died of scurvy while on a whaling ship. He then purchased Meg's freedom in 1772, the same year. She was pregnant so he named
that son, Solomon, Jr. In 1775, Venture purchased the freedom of 21-year old, Hannah - thus having freed his entire family.

He lived his remaining years on a 10-acre farm that he purchased in Haddam Neck. Within 3 years, it was over 130 acres. He earned his living by fishing, whaling, farming, and trading. Venture was 6'1-1/2" tall, 300 lbs., and very strong. Some say this easily enabled him to carry his wooden tool chest on his back as he went to work each day. However, most historians say this is his blanket chest, not a tool chest, as it shows no shelving for tools or wear and tear from tools jostling around inside. The correct story has not been proven.

In 1798, Venture Smith became the first black man to document his capture and life as a slave. He dictated his life story to the New
London newspaper, The Bee. Recent research projects have proven what was printed was all his own words, and not "white-washed," as some detractors claimed.
Additional Resources and Information

Venture Smith's life, in his own words, is available in Venture's Narrative. Another book, Venture Smith's Colonial Connecticut, was written by Venture Smith and Elizabeth Norman. The Museum shop includes softcover print copies of these books.

ConnecticutHistory.org, a project of Connecticut Humanities, has published Venture Smith, from Slavery to Freedom.

In 2021, the Library of Congress published an article, Venture Smith: The First Slave Narrative.

Venture Smith in Stonington: A Family Affair was presented in 2021 by the Stonington Historical Society and is available to watch online.
​Venture Smith's life and words continue to reverberate to this day.