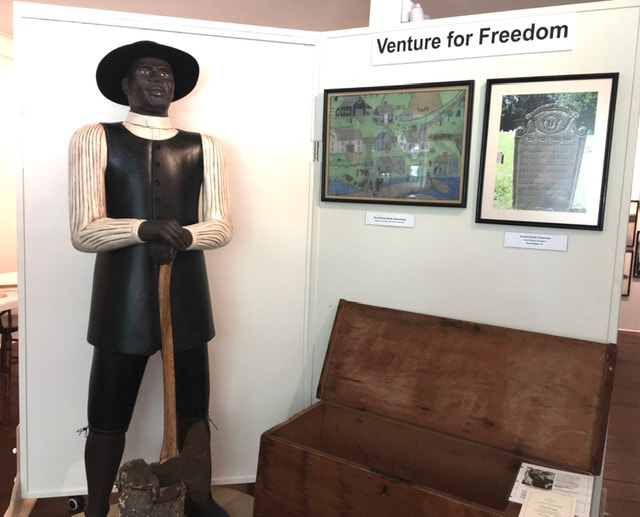 In June of 1979, the East Haddam Historical Society received the Venture Smith wooden chest from Mrs. Dorothy Nickerson of RFD2 in Dover, New Hampshire. Mrs. Nickerson was the daughter of the late Dorothy Day Durfee, who lived in the Barak B. Willey house in Hadlyme, just south of the Hadlyme North School and Hadlyme Congregational Church. William H. Day purchased this house in 1879 and the Day family lived in it until Dorothy Day Durfee's death. The Venture Smith wooden chest came from this house, and according to Dorothy Durfee, had been in the Day family for a very long time - several generations. It is not known which member of the Day
family purchased the chest or when it was purchased.

In all probability, the chest was purchased by Elijah Day at the auction held at the Upper East Haddam Landing after the death of Venture's son Solomon in 1843. The probate court ordered that Solomon's property, both real and personal, be auctioned
to pay for his debts.

Elijah Day, the first of that name in East Haddam/Hadlyme, came from Colchester where he was born June 13, 1802, the son of Justin and Matilda Day. Elijah married Rebecca E. Hungerford at the Hadlyme Congregational Church on October 25, 1827. Both Elijah and Rebecca became members of the Hadlyme Church on November 18, 1827. Elijah Day died in 1867. No record of Rebecca's death has been found.