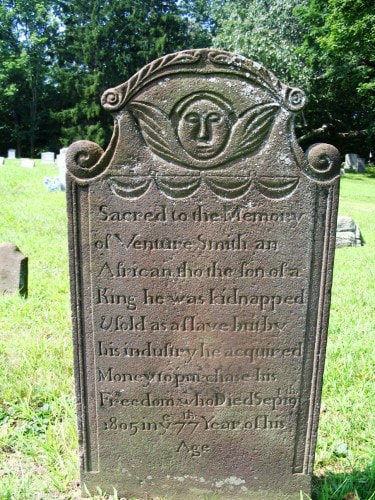 1729 1737 1750 1754 1759 1760 1765 1774 1798 1805
​Venture Smith's grave is one of the original sites on the Connecticut Freedom Trail. "In recognizing the importance to Connecticut of numerous sites in the state that are associated with the heritage and movement towards freedom of its African American citizens, the Connecticut General Assembly in 1995 authorized that these locations be developed into a Freedom Trail. Included on the Trail are buildings used on the Underground Railroad, sites associated with the Amistad case of 1839-1842, and gravesites, monuments, homes and other structures that represent the concept of freedom so cherished in the American mind".

Timeline compiled in July 2005 and last revised in 2015 by Karl P. Stofko, Municipal Historian.
Contact Us