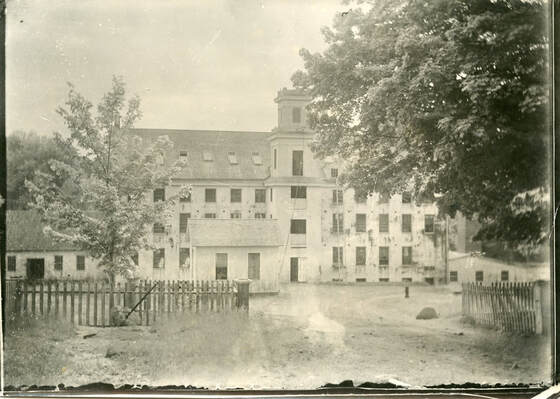 Though the plow, the axe, and the ox-wagon may be regarded as the leading emblems of East Haddam industry, The spindle, the loom and the crucible have borne an important part. These Industries arrived in the early 19th century. Later in the century, there were a series of fifteen separate mills centered mainly in the Moodus section of town. The metal industry was mainly located at Goodspeed's Landing.

Each mill was of medium size and employed from a dozen to eighty "hands", many of whom were women. Twelve of these mills were along the Moodus river, one at the outlet of Bashan Lane, one on the Salmon River and one on Creamery Road in the village of East Haddam. They produced twine, duck or canvas and gill netting.

Bales of cotton were brought up the Connecticut River by steamer to the two landings in East Haddam proper. They were then hauled the four miles to Moodus, there to be processed by carding, multiple spinning and weaving into twine, duck, cloth and netting. Most of the material manufactured was and is used by the maritime and fishing industry.

Overshot wheels were first employed for water power. Open wheels of this nature were subject to icing and constant maintenance. They were later replaced with turbines which could be housed inside the basement of the mill where icing was no longer a threat. Another advantage of the turbine was that sped could be controlled.

Water power however, was not free power. There was a the cost of the maintenance of the dams, ponds, cars, penstocks and tail races. There was the expense of a man to keep the intake screens free of leaves and debris, especially during the fall months. An added liability was low water in the dry months, causing suspension of operation.

In later years, two of the turbines were hooked up to electric dynamos; the current developed was used for individual motors, in the modern fashion thus eliminating the line shafts. This turn led to the disuse of the turbines and generators and the purchase of electric power.

Power was carried to the main floor by a large belt, which drove a line shaft suspended from the massive timbers and carrying pulleys from which belts ran each machine. Another large belt ran to the floor above to power a similar line shaft. Carding and roving machines were usually on the main floor, with the spinning machines on the floor above. One can imagine the deafening clatter of the high speed machines, intermingled with the flapping of the leather belts on the line shaft and machine pulleys.

Each floor of the typical mill was heated by a large stove. The pip was suspended from the ceiling and carried a considerable distance to the flue, to conserve most of the heat borne up the pipe. Illumination was by oil lamps, lighted as darkness fell, by a workman with a tiny finger ring lamp.

As the floors of the wooden-braced frame structures were oil soaked, there was always the danger of fire and several of the mills burned. The latest, and perhaps most tragic victim of fire, was the Neptune Twine Mill, built in 1832, and in continuous operation until struck by lightning in 1972, when it burned to the ground. Others were torn down, and today only 4 remain. The William Duck Mill, not in use today; Brownell and Company still operates after 150 years; the Harper Bois Mill, which is now operated by Brownell and Co; and the former business of Wilbur J. Squire on creamery road, now owned by  Commercial Fishing Supplies inc. They deal exclusively with nylon and other synthetic material today.